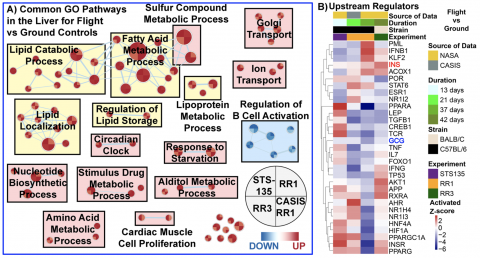 Spaceflight has several detrimental effects on the physiology of astronauts, many of which are recapitulated in rodent models. Mouse studies performed on the Space Shuttle showed dysregulation of lipid metabolism in liver. This dysregulation can potentially lead to increased chance of liver disease in astronauts due to the space environment.

In this work, three liver datasets were analyzed from two different strains of mice (C57BL/6 (Jackson) & BALB/c (Taconic)) flown aboard the International Space Station. Increased lipid accumulation occurred in all space-flown mice compared to ground controls regardless of strain or exposure duration. Similarly, transcriptomic analysis revealed several pathways that were affected in both strains related to increased lipid metabolism, fatty acid metabolism, lipid and fatty acid processing, lipid catabolic processing and lipid localization. In addition, key upstream regulators were predicted to be commonly regulated across all conditions including glucagon (GCG) and insulin (INS). Moreover, quantitative proteomic analysis showed that a number of lipid-related proteins were changed in the livers during spaceflight. Taken together, these data indicate that activation of lipotoxic pathways are the result of space stressors alone and this activation occurs in various genetic backgrounds during spaceflight exposures of weeks to months. If similar responses occur in humans, a prolonged change of these pathways may result in the development of liver disease and should be investigated further.