On September 29, 2017, NASA’s GeneLab project made it easy for scientists to find and use biological data from experiments performed in space. 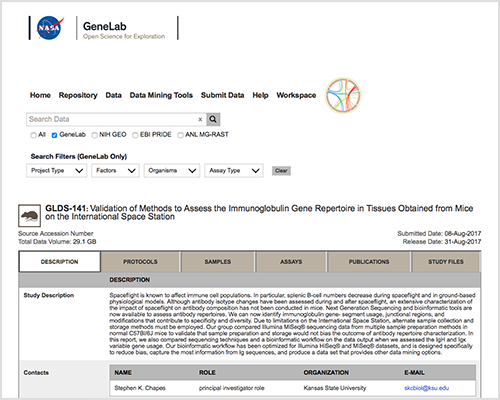 Explore the new features and federated search in GLDS 2.0 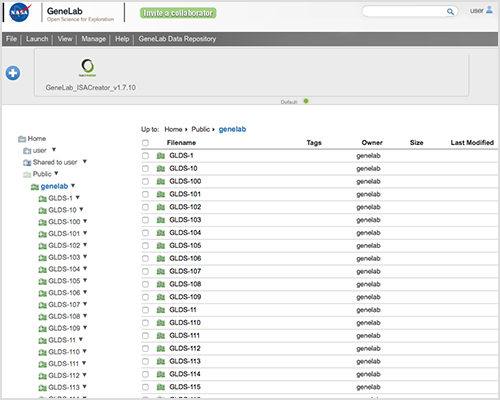 GeneLab, a science collaboration and data system effort, gives scientists access to data from experiments onboard the International Space Station that explore the molecular response of terrestrial biology to spaceflight environments. Over 135 data sets are available, including data from microbial, cell biology, plant, insect, and rodent experiments that have been performed in space. With the newest release, data in NIH Gene Expression Omnibus (GEO), EBI Proteomics IDEntifications (PRIDE), and Metagenomics RAST Server (MG-RAST) are accessible by searching through genelab-data.ndc.nasa.gov.

The multi-year GeneLab project provides a data system that is a collaborative workspace with tools to analyze and visualize space-relevant omics data. GeneLab’s mission is to maximize the utilization of the valuable biological research resources aboard the International Space Station by collecting genomic, transcriptomic, proteomic, and metabolomic data known as “omics.” One important aspect of GeneLab’s mission is to help the scientific community and the population at large gain new knowledge for space omics data. By providing a portal linking processed data to flight parameters, GeneLab enables exploration of the molecular network responses of terrestrial biology to the space environment, allowing researcher to understand the complex responses of biological systems to the space environment.

GeneLab data are useful for the development of countermeasures, monitoring the microbes that colonize the space station, understanding how plants (food) could be modified to grow better in space, and unraveling the responses of humans and other organisms to the combined effects of altered gravity and space radiation.

The GeneLab science initiative is led by the Space Biosciences Division, and the data system is managed by the Intelligent Systems Division, both at Ames Research Center. GeneLab is jointly funded by NASA’s Space Life and Physical Sciences Division and the International Space Station Program, within the Human Exploration Operations Missions Directorate.

We would like to know! Please send us your citation so that we can include it in our metrics and post it on the GeneLab website.