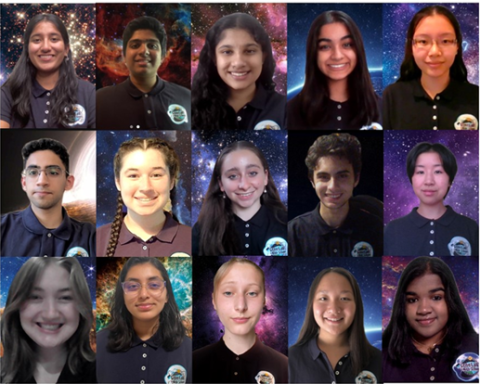 The 2022 Virtual GeneLab for High Schools Summer Training Program (GL4HS) was successfully completed on July 8, 2022, led by Dr. Elizabeth Blaber of Rensselaer Polytechnic Institute. Fifteen high school students from across the continental U.S. participated during the intensive 4-week training program. The students were rising juniors or seniors from fifteen high schools in six states (Georgia, California, Virginia, Texas, Maryland, Washington). Three high school biology instructors were also selected to attend the program to learn how components of the course could be implemented in their classrooms.

The GL4HS program consists of three core components: learning modules, networking, and a research training project. Students delved into the GL4HS program from their first day and learned topics ranging from biology and human physiology in space, to the molecular biology of gene regulation, signal transduction, and omics analysis methods. The GL4HS course uses the GeneLab Galaxy platform to teach students to analyze RNA-sequencing data from experiments flown on the International Space Station. Students also learned core bioinformatics skills including normalization methods and algorithms, statistical analysis of large-scale datasets, and assigning biological meaning to differential gene expression data. The cohort of teacher interns shared the classroom and learned the bioinformatics techniques and principles alongside the high school students.

In addition to course lectures by Dr. Blaber, there were guest lectures by professionals from around the country including NASA scientists and managers, university professors, and industry professionals. GL4HS participants enjoyed meeting with NASA astronaut, Megan McArthur Behnken, Ph.D. during the summer. Dr. McArthur began her astronaut career when she was selected as a mission specialist in 2000. She has had many notable achievements, including being “the last one with hands on the Hubble Space Telescope.” This networking event was held in conjunction with interns from the Space Life Science Training Program (SLSTP), a NASA Space Biology training program for college students.

Finally, students were assigned the task of analyzing a dataset from the GeneLab Database and developing a testable hypothesis and research proposal from their analyses. Teams of three students chose one of the GeneLab transcriptomic datasets from model organisms exposed to spaceflight including Drosophila (fruit fly) heads, Arabidopsis plants, mouse thymus, mouse lung, and mouse spleen. Using the GeneLab Galaxy analysis platform, students normalized data and performed statistical analyses followed by pathway analysis on their data. Besides direct support from the GL4HS team, students were also guided by numerous volunteer Subject Matter Experts (SMEs) recruited from the broader scientific community, and by the bioinformatics manual written by the GL4HS team. The students worked exceptionally hard on their projects and delved into the scientific literature surrounding their tissues of interest. Their final proposals were as follows:

The Three MUSketeers: Assessing the Influence of Space Radiation in a Circadian-Dysfunctional State in Augmenting Lung Cancer Risk

The Involuted ThyMUS Histonauts: Leaving No Histone Unturned: The Role of H2AC21 and H2AC11 in Reducing Thymic Epithelial Cell Proliferation

The Thalented Arabidopseeds: RNASeq and Fluorescence Analysis of the Response of ERF2 and ERF104 in Arabidopsis thaliana under Simulated Altered Gravity

De-Liver Around the Clock: The Effects of Differentially Expressed Nr1d1 on the Circadian Rhythm and Hepatic Bile Acid Synthesis In Spaceflight Conditions

In parallel, the high school teacher-interns developed custom GeneLab-based bioinformatics curriculum modules to use in their own high school classrooms, and which are slated for eventual public release. Informally, they also analyzed GeneLab datasets of their choosing and compared their bioinformatics analyses with those of the student interns. On the final day, student teams and teacher interns presented their work to the Ames scientific community. Students were coached to develop formal presentations which included background research, analysis of the GeneLab dataset, the hypotheses that they generated, and the experiment that they designed to test their hypothesis. Each team also submitted a written research proposal. Both the oral presentations and the written submissions were judged respectively by the audience at the presentation or by volunteer SMEs from the scientific community who were provided a judging rubric. This year’s winning team was "The Involuted ThyMUS Histonauts;" the team members will be sponsored by NASA’s Biological and Physical Science program to present their poster at the 2022 Annual Meeting of the American Society of Space Gravitational Research (ASGSR) in Houston, Texas.

To learn more about the program, please visit the GL4HS page.